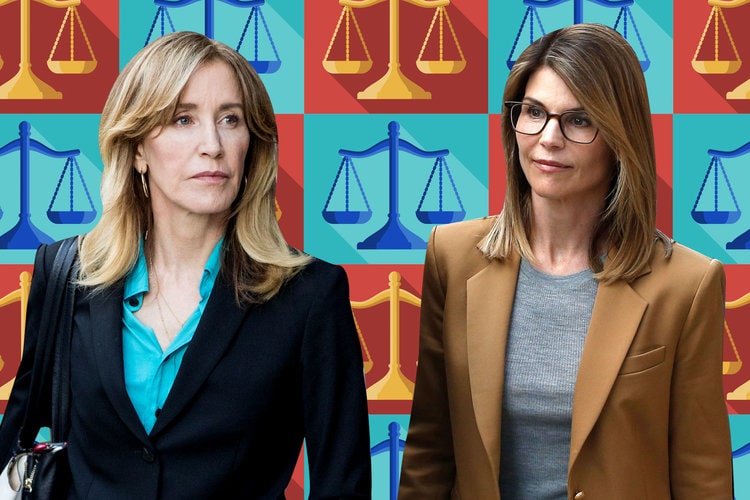 Since the college admissions scandal broke nearly a month ago, actresses Felicity Huffman and Lori Loughlin have handled things quite differently. And the consequences may be extremely different as a result.

Last week in Boston, Loughlin was all smiles as she signed autographs before appearing in court (big mistake, more on that later) while Huffman has already pled guilty to a single count of conspiracy to commit mail fraud and honest service mail fraud before issuing a public apology.

“I am pleading guilty to the charge brought against me by the United States Attorney’s Office,” Huffman told the court. “I am in full acceptance of my guilt, and with deep regret and shame over what I have done, I accept full responsibility for my actions and will accept the consequences that stem from those actions. I am ashamed of the pain I have caused my daughter, my family, my friends, my colleagues and the educational community,” she continued.

“I want to apologize to them and, especially, I want to apologize to the students who work hard every day to get into college, and to their parents who make tremendous sacrifices to support their children and do so honestly. My daughter knew absolutely nothing about my actions, and in my misguided and profoundly wrong way, I have betrayed her. This transgression toward her and the public I will carry for the rest of my life. My desire to help my daughter is no excuse to break the law or engage in dishonesty.”

She also took full responsibility for paying $15,000 to facilitate cheating on her daughter’s SAT test.

Loughlin, meanwhile, continued smiling, even meeting up with her daughter Bella for lunch in Los Angeles, greeting her with a hug and a wide smile. You’d never know she and her husband, designer Mossimo Giannulli, were in deep trouble. The two allegedly refused a plea deal from federal prosecutors on Tuesday, who then slapped the couple with new charges of money laundering. Do. Not. F–k. With. The. Feds.

“Lori Loughlin never anticipated the seriousness of the charges and now she’s nervous. A lot of people don’t understand the federal system is extremely efficient and they really bring charges that stick. At the federal level, these prosecutors have about a 97 percent conviction rate when they go to trial.”

In other words, they do their homework. And if you don’t want to cooperate, and you are smiling for the crowds outside court, they’re going to hit you harder.

“The federal prosecutors have done a very good job not leaking a lot of info, but there was an offer made. The fed prosecutors go, ‘Look, we’re going to give you a sweet deal right now, because cases can take a very long time to settle.’ The sweet deal was made, Felicity Huffman released a statement accepting blame, apologizing to the public and to her daughter and she’s copping a plea. It’s fantastic and I think will reinvigorate her career.”

On the other hand:

“As a defense attorney I was shocked seeing Lori walk into court smiling and then she’s in public laughing with her daughter,” Megerditchian said. “You are taking another parent’s child’s spot who legitimately fought for years with grades and athletic achievement to get into a prestigious school. A lot of people believe that this is egregious. There is a disparity when it comes to what the rich get and what the poor get. But when you work hard, you earn, and that keeps us on an even level.”

She added that this is what upset prosecutors, many of whom go home and watch the news. “Prosecutors watch the news and to see a defendant act this way only increased the backlash,” Megerditchian explained. “I always tell my clients when you go into court remain calm — no laughing, no giggling, look professional and treat this seriously. That was a huge misstep for Lori. Now the charges are very trumped against her and her husband. With the increased charges they are now facing a 20-year maximum sentence.”

And it’s likely they will do actual time.

“It’s like gambling,” Megerditchian explained. “They might have a very strong defense that we don’t know about, so you can double down and get off. But she could have pled guilty and had a very minimal sentence. By taking a gamble they got the additional charges.”

“This is not murder, no one was physically injured, but when it’s a financial crime or someone trying to have an unfair advantage (and money and celebrity are in the mix), the government will come down hard,” Megerditchian continued.

“They’re facing this because they didn’t want to take the deal. At this stage they have to come up with a lot of litigation. It now enters a stage where the defense team will try to prove they are outstanding citizens. Were the parents involved in charitable acts in the community to balance this out? A judge will take that under consideration to give her a much lesser prison sentence or a probationary sentence with a bracelet maybe.”

In the end, she says, Loughlin’s lack of remorse will cost her. “It looks like Lori and her husband will do some time,” Megerditchian concluded, “while Felicity essentially admitted to wrongdoing publicly, and in court that carries a lot of weight and she will likely not do federal prison time.

“It’s impossible for anybody to know whether someone will do actual federal prison time, but it seems like Felicity has a better chance at not. The judge will have sympathy while Lori with the increased charges and a lack of remorse, it might have an adverse effect and it looks like she will do time.”

Although it will likely be minimal security, Megerditchian says, it’s still “never easy.” “As a mom you will sacrifice your life for your children, and it’s not like this woman did this for herself — she did this to give her daughter a future. But she took someone else’s spot that legitimately belongs at USC. Hollywood has its own way of justice in a way, she’s losing her gigs right and left, and this is going to have such major financial consequences for that family.”